Winner of the Best Networking Professional – Career Achievement Award, Steven Potter hails from Nova Scotia, Canada. With a degree in engineering, he has had an impressive 30+ year career writing computer software for a variety of engineering applications in the aerospace, transport, and communications industries. Starting on an Elliot 803, Steven has written software for a radar research lab, an Airbus A310 simulator, and training simulators for patrol ships. He developed a Computer-based Test System (CTS) which enables simulation modules to be tested and analyzed ‘off-line’. He solved a serious problem on an automatic passenger door operator system for the British Columbia metro system. Throughout his long, and productive, career, Steven has always placed the end user at the front, even when that meant an increase in the cost of the product.

Winner of the Best Networking Professional – Career Achievement Award, Steven Potter hails from Nova Scotia, Canada. He has had an impressive 30+ year career writing computer software for a variety of engineering applications in the aerospace, transport, and communications industries. We are honored to add Steven to our Hall of Fame of outstanding professionals. He certainly does exhibit the high level excellence, dedication and ethics that earned this recognition.

Born and raised in England, Steven received a degree in Engineering from Havering Technical College. It is interesting to note that Steven has never had anything other than an IT job. He wrote his first computer program in 1968 on an Elliot 803, and then started writing code for the renowned Marconi Elliott Avionic Systems Limited (affectionately known as “MEASLES”). There he worked in the Radar Research laboratory for flight simulation, control systems and computer based test systems, enabling both off-line and real-time system performance evaluation and testing, and the capability of ‘hot-swap’ of real-time software modules. This was followed by a position as an Integration Specialist for KLMs Airbus A310 simulator at Schiphol, in the Netherlands. Subsequently, he was employed by Securiplex, where he worked mostly on embedded control systems and a Damage Control Console Training Simulator for the Canadian Patrol Frigate ships.

Once he immigrated to Quebec, Canada, he began a stretch of time working for CAE Electronics Ltd. While there he developed a Computer-based Test System (CTS) enabling simulation modules to be tested and analyzed ‘off-line’. While employed by Vapor Rail, Steven found a creative solution to a serious problem with an automatic passenger door operator system for The British Columbia SkyTrain metro system. A feat they said could not be done. Currently, he is a Senior Software Design Engineer/Computer Systems Programmer/Embedded Systems Programmer for Spottek.

When asked what he would say to Bill Gates if he met him, Steven replies “Hello Bill, you’re one of the three Bills that have changed our world: along with the Bill of Rights, and the Bill of Shatner!”

Citing a teacher as his first great influence, “I was very privileged to have attended one of the first schools in the world to have a computer on the premises. Mr.William R. Broderick (a pioneer in the use of computers in education) was one of my teachers at the school; and one of my sources of inspiration!” Steven keeps abreast of new technologies, skills and the ever increasing fields in which they are applied. “Membership in professional organizations, like the NPA, IEEE Computer Society, CIPS (Canada), and the BCS (U.K.) brings trade magazines to my home, with many articles on current developments. Those magazines are my primary source of ‘What’s happening’ in our fields of interest. It is also important to keep studying, to maintain a repertoire of marketable job skills”. Steven is currently working on his Master of Science in Information Systems possibly with a future in education.

Steven belongs to the IEEE (Computer Society and Aerospace), the Canadian Information Processing Society, the British Computer Society, and the UK’s Institution of Engineering Designers. Would he encourage others to join the IT profession? Affirmative. “From the earliest days of the beeps and flashing lights of control consoles, buzzing paper tape punches, rattling chain printers, and chattering teletypes to today’s hand-held live videophones, digital media library, intelligent robots, and engineering technology marvels, computers have been, and remain, FUN!”

Every year the Network Professional Association, along with sponsors like Culminis, Cisco Press and Interop look for outstanding individuals worldwide who lift the bar and inspire others. Steven Potter has had an exemplary career in which he has found creative solutions to complex issues, enjoying every minute. The fact he continues to learn and challenge himself is a testament to his dedication and character. Congratulations on your achievements, Steven Potter! 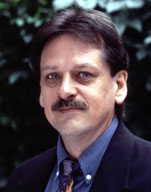